The Cephalopod that Befriended the Wind


I finished my story Gate Into Danger on Friday, 1/6/2017.  I worked on it all week but at least I managed to finish it.  My goal, of course, is to complete at least one new Grandpa Anarchy story a week since I'm publishing one new story every Monday.

I had mentioned that I had a sort of story arc going on starting with the story Annie Two and involving the new Anarchy computer, and that rachets up a bit in subsequent stories, and I wanted to bring it to some sort of close.  I also wanted to do a follow-up to a story called Until That Day, and so as soon as I finished my story on Friday, I began plotting a new story titled The Ghost and Miss Bloodraven, which should fulfill both goals.

I did not get much work done on this story over the weekend, but I have it fully plotted out -- it's several scenes, so a somewhat longer story than usual, with an actual plot.  I've been working on the first scene, which will be something like the first scene of Teddy's Bear -- an actual scene from the past when Grandpa Anarchy was Kid Anarchy.  I've established that Kid Anarchy worked with several "companions" in the 1920's -- young women, for the most part, with unusual abilities such as Lady Prometheus's pyrokinesis (from Teddy's Bear).  In the story Until That Day I mention some of the others -- Hurricane Hazel, who controlled weather; Sub Zero Sadie, who was an pagomancer, controlling ice; and Miss Bloodraven, who was a shapeshifter and could become a raven or a panther. 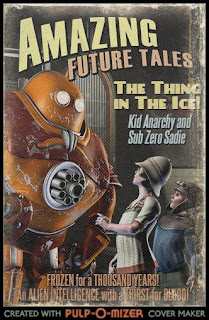 I really like these stories that delve into Grandpa's past.  I've played with the Pulp-O-Mizer to create imaginary pulp covers with some of the titles of "actual" Grandpa Anarchy pulp stories that I've established as part of his backstory.  That same web site has a random pulp title generator, and I wrote down a bunch of them last night -- including:  Surrounded in the Purple Desert, The Last Monument,  The Profane Engineer of Andromeda, The Flower of the Wasp Dancer, Shadow of the Architect, The Frozen Girl of Argon, Gods of the  Strange Brain Eaters, The Cube of the Wombat Army, Valley of the Atomic Midshipman, Frog from Beneath the Bazaar, Cephalopod that Befriended the Wind, The Merchant that Brought Doom, The Lobster from the Soaring Pyramid, and The Volcano of the Isotope Choir.

Some of these are very silly, but in a way I'm most attracted to the ones that are the silliest.  Atomic Midshipman?  Isotope Choir?  A cephalopod that befriended the wind?  These things really make me curious to figure out what they're describing exactly.

I want to try and write a couple of stories with these titles.  ^_^  Most likely these will be pulp-style stories that take place in the 1920's and 1930's when Grandpa was a young man.  Another part of his history is that he's often worked with members of the Nova family -- Doctor Thomas Nova, his son Elias Nova, his grandson  Major Tom Nova and wife Destiny Nova, and their daughter (Thomas Nova's great granddaughter) Jennie Nova.   They're a family of space explorers in the grand tradition of the old pulp stories, so one or more of these pulp stories might involve them.  ^_^  I could possibly frame these like I framed Teddy's Bear -- as Grandpa telling a story.  Or I could have even more fun and frame them as one of the Continuity Crusaders reading an old pulp story -- so that you're not sure if what happens in the story is actual Grandpa Anarchy history, or just an old pulp story about him.

So I think that will be one of my goals for the rest of the month.