In Search of A Trope That Doesn't Exist

Somewhere along the line, I got this idea in my head that I ought to write about a character who produces weapons spontaneously from her skirt, as in various well-known anime shows.  I couldn't name most of these famous shows, but I'd seen images and upon reflection was certain  that Mami of Puella Magi Madoka Magica had done exactly this.  As the above GIF shows, I was right on that score, at least.

I named my character Ex Habitu, meant to be Latin for out of the skirt or out of the dress, and a take on the term ex nihilo which means out of nothing.  Out of nothing is really where these weapons would be coming from, of course.  I have no idea if my Latin works, but then, neither does my protagonist.

I was also certain I had at least one image of Alice in Wonderland doing exactly this, and I knew of an anime show I'd never watched where a girl appears to do this.  I assumed it was a common anime trope of some kind.  However when I started  trying to research the subject, I found that while Spontaneous Weapon Creation is a very common anime trope, and pulling weapons out of your clothing, or hair, or other people's bodies is also common in anime -- girls specifically producing weapons from their skirt was not so common as to deserve any mention on tv tropes.  There are pages for a Hammerspace trope, a Trouserspace trope, and the above-mentioned instant weapon creation.  Pulling massive weapons out of small spaces or thin air is indeed very common in anime, but specifically doing what Mami does in the gif above?  Not as common as I thought.

Mami doesn't even do this trick every time.  She pulls guns from her clothing in many different ways, so it's really just a version of the above tropes.

But why had I thought this was so common?  I did a little research.  First, the other anime that I  was forgetting the name of. 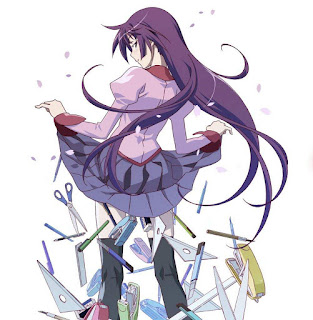 This turned out to be a girl named Hitagi Senjōgahara of Bakemonogatari, but the story is just that she stores office supplies up her skirt... somewhere... and can produce them and use them as weapons.  But the image of her producing all of these sharp-edged supplies from beneath her skirt, seemingly from nowhere, is so iconic that there's even a plastic figurine based on it: 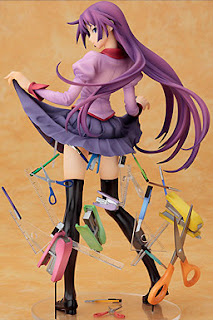 So yes, I did have something I was basing this idea off of.  As for the third example of this, which convinced me that it was a common trope?  It turns out that there are a lot of images of Alice In Wonderland surrounded by falling cards, and quite a few where she is falling with the cards, and even a couple of images where she is apparently producing cards from her skirt.  In retrospect, it's obvious that the first of these images is copied directly from the Bakemonogatari image. 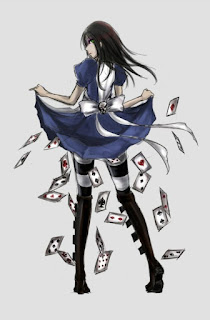 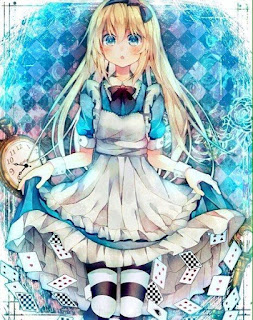 I didn't actually have any images where she produced weapons in this manner, although thanks to The Madness Returns series of computer games, there are any number of images of Alice with blades or other weapons.  (In the game, she most often uses a giant rune-carved kitchen knife, which is the Vorpal blade, so that's what she's got in most of the artwork.) 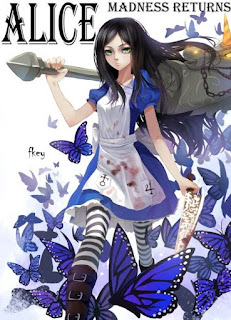 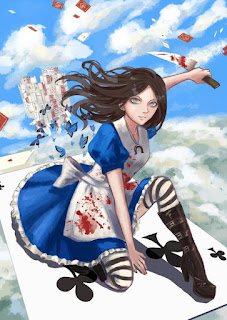 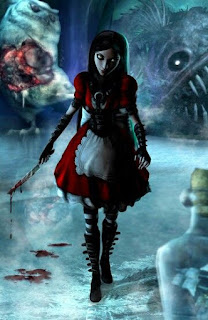 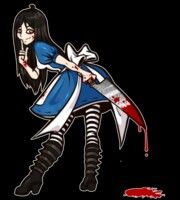 Somehow the images of her dropping cards from her skirt merged in my head with the idea of Alice with weapons.

The sum of this story is that I created a character based on a trope that mostly doesn't exist.  My three examples were pictures of Alice In Wonderland producing cards in this manner, but not weapons; Hitagi from Bakemonogatari producing office supplies as weapons (but they were supposedly stored under her skirt all along); and Mami from Puella Magi Madoka Magica producing rifles in this manner -- which is only one of the ways that she produces them.  However, she does do it at least once!

Anyway this weekend I wrote a story called Dressed to Kill, not about the character who has this ability, but about the magical dress that she owns and where it comes from.  It turns out that Eve the Explorer -- the character I've written multiple stories about this week -- had it first.